Your basket is empty.
Home

In South Africa, a Potjie, directly translated from Afrikaans as "small pot",  has also become known as a "phutu" pot amongst the South African tribes.

A Potjie is a 3-legged round bottomed cast iron pot where you put your ingredients in, and it simmers merrily over coals while everyone sits around it chatting away, a far more sociable event than a Braai (BBQ).

A few years ago the "Potjie craze" took over in South Africa as an alternative to the traditional Braai.

Everyone usually has his own "secret" ingredients and Potjie competitions are very popular at fairs all over South Africa. 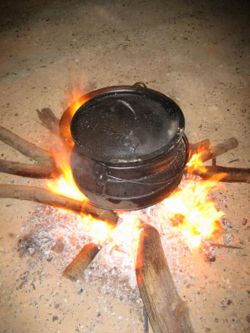